Non-Resident Nepali Association (NRNA) was established with the purpose of uniting and binding the Nepali Diaspora under one umbrella on 11 October, 2003. In the course of completing 12 years of its existence NRNA has developed into a non-governmental global organization and a network of Nepali origin by establishing National Coordination Council (NCC) in 82 countries to represent its interests, concerns and commitments. 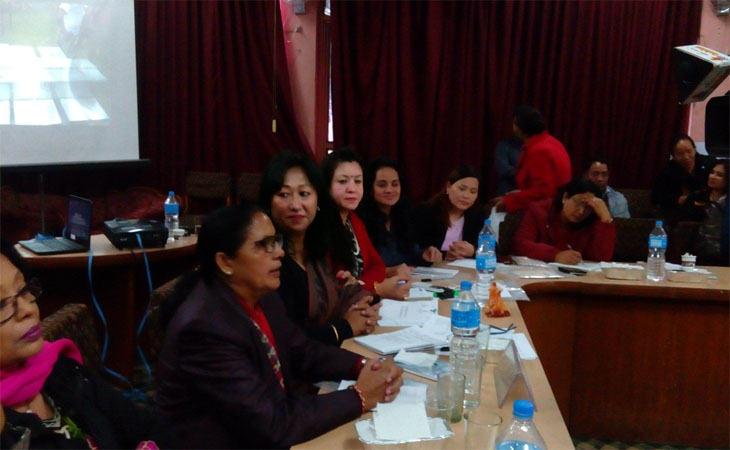 An interaction program was organized by Paurakhi and International Labor Organization (ILO) on the occasion of the International Migrant workers day on 11 December 2016 in Kathmandu. The program was graced by Hon. Labor Minister of Nepal, Chairman of Women Department and participated by Officers of Labour Ministry, Women and Children Welfare Ministry, Foreign Employment Promotion Board and NGOs working in the field of Migration and Foreign employment. The main focus of the program was the reintegration of migrant women workers. We heard around 8 cases and how they are working in Nepal after coming back from Lebanon, Saudi Arabia, UAE, Japan and Oman.  Most of the returnee migrants were engaged in agriculture based activities in Nepal. Whereas GoN is also providing special programs based for agriculture.

During the program, NRNA was given the platform to put forward the views concerning women migrant workers and foreign employment. Ms. Sapila Rajbhandari Women Coordinator reported the problems of Nepali Women living in 75 countries. Ms. Rajbhandari also requested the GON to focus on below major issues:
1) Hire at least one local lawyer and appoint Labour attache in countries where Nepalese citizen go to work as migrant workers.This will help to solve issues legally.
2) Make safe houses, where the migrant women worker exceed 1000.
3) Lobby to give travel document to children born in foreign country to single mothers.

Speaking in the program, Ms. Sushila Rana (Sujana) member of NRNA Foreign Employment Migrant Workers Welfare Committee informed about her case and why she was deported from Lebanon. It was informed that the Amnesty International has taken up her case. Ms. Junu Gurung, NRNA NCC Korea reported about the situation of paper marriage in Korea and the difficulties it creates for the women who go there on these contracts. And how the “women for women” helping women and organizing shelter for these women. The program was informative and managed to address the major concerns of the women migrant workers. Participants also had an opportunity to hear the experiences of the migrant workers from different destination.

Let us unite to face and fight against this difficult time, together; and send oxygen to Nepal to save the lives of our beloved back home.